How do the ‘Non-Dom’ reforms affect me? 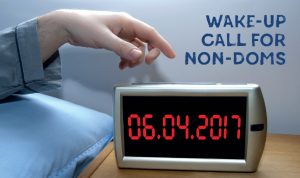 The government has published draft legislation which will cause fundamental changes to the tax position of many UK resident non domiciled individuals, with effect from 6th April 2017.  Those affected  particularly by these reforms are individuals resident in the UK for 15 out of the previous 20 tax years (or ‘long term non-doms’).

A non-dom may be affected in 2 ways:

In order to explore re-structuring an individual’s affairs in the light of these reforms, please submit the following questionnaire online or call 0203 008 8100.

Take the questionnaire
Taxation of Non-doms
Go to Top