Draft legislation on the taxation of non-doms – more to come 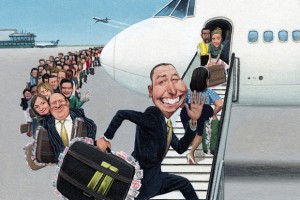 The Government has released draft legislation to the UK domicile rules. The proposed modification follows the Chancellor’s recent abolishment of permanent non-dom status in last year’s Summer Budget. Finance Bill 2016 proposes the introduction of the concept of “deemed domicile” for income tax, capital gains tax as wells as inheritance tax for persons who were born in the UK with a UK domicile of origin who obtain a domicile of choice and subsequently return to the UK (“boomerang non-doms”); and for persons who have a foreign domicile who have lived in the UK for more than 15 out of the previous 20 tax years (“long term non-doms”).

However, what is interesting about the draft legislation is what it does not address, as it contains nothing about how long term non-doms will be taxed. Indeed, it indicates there will be further revision of the taxation of capital gains within Offshore trusts (Section 86 TCGA 1992) in FA 2017. These revisions were supposed to be in FA 2016, which means that we won’t know what the law is until Summer 2017 i.e. after the tax year has already started. Why keep changing legislation for non-doms? Why not do it properly once?

The new changes will mean a period of uncertainty that will inevitably follow in 2017: people could become tax resident before this becomes law in Summer 2017, but after the tax year has started. The changes are likely to be tiresome for resident non-doms in the UK who have endured major reforms to the remittance basis of taxation in recent years, including increases to the Remittance Basis Charge unveiled in the Autumn Statement in 2014.

The rationale for these changes is to be fair, but the question that arises is whether the new “deemed domicile” distinction for boomerang non-doms is fair. Under the new rules a boomerang non-dom taxpayer will be deemed to be domiciled in the UK if  they were born in the UK, have a domicile of origin in the UK and is resident in the UK for the tax year in consideration.

Seconldy, there was also feedback that there should be a short grace period for people who become temporarily resident in the UK, so that these individuals would not be “deemed domiciled” automatically in their first year of residence in the UK. Regrettably the Government has dismissed both these suggestions. Those affected will no longer be able to claim the remittance basis of taxation from the tax year 2017/18 onwards for income tax and capital gains tax, and they will no longer be liable to claim the “remittance basis”.

Under these draconian rules boomerang non-doms become deemed domiciled in the year that they come back to the UK and this will mean that people will have to become very careful with their day count under the Statutory Residency Test.

Categories: Articles and Publications, Immigration, Offshore Trusts and Structures, Press Releases and Commentary, Russia and CIS, Tax Updates, Taxation of NondomsBy Mark Davies & Associates11 February 2016
Recent posts
Go to Top
We use cookies on our website to give you the most relevant experience by remembering your preferences and repeat visits. By clicking “Accept”, you consent to the use of ALL the cookies.
Cookie settingsACCEPT
Manage consent